>FIX University Looks at The Sopranos 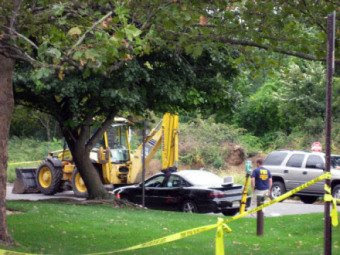 Sources: Human Remains Found at Mob Burial Site
EAST FARMINGDALE, N.Y.    Tests are set to be conducted on remains that were found at a Long Island site Monday afternoon where investigators believe a missing college student and two mobsters may be buried.

Sources tell: the remains were discovered wrapped in a tarp in the second of three sites where the FBI has been digging for nearly a week.

Sources say investigators believe they have unearthed the body of alleged Colombo mobster William "Wild Bill" Cutolo. The body was allegedly found with shoes and pants that appeared to be those worn the last time Cutolo was seen alive. Cutolo disappeared in 1999.

The tarp and its contents were removed intact to the medical examiner's office to identify the remains and determine the cause of death.

Bones were also found Sunday at the East Farmingdale site but the medical examiner determined they were dog remains.

An FBI team working with police have been scouring an area of East Farmingdale after receiving a tip about where to find the remains of gangland murder victims.

Investigators will continue to search the area where informants say two more bodies are buried including that of 21-year-old Pace University student Carmine Gargano Jr.  who disappeared in 1994. Authorities were told he was killed in a revenge plot targeting his cousin.

Authorities also believe another Colombo crime family member believe to have been killed in the underworld disputes in the 1990s may also be buried at the site.