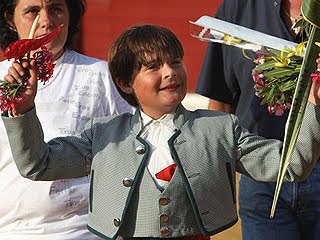 PARIS — He's a tiny torero, a bullfighter with a baby face. But 10-year-old Michelito has become the symbol of a debate much bigger than himself.

French anti-bullfighting campaigners say the boy, who came from Mexico to perform, is risking his life in the ring. Local authorities in southern France canceled two demonstrations where he was set to appear. Other performances have gone ahead, with Michelito — who has big brown eyes and a floppy bowl cut — showered with flowers by fans.

It's all part of a bigger battle: French animal rights groups vs. bullfighting, which is a tradition in southern France as in neighboring Spain, and which has a small but passionate French following.

For Michelito Lagravere, the passion started young, about as soon as he could walk. Born in Mexico to a Mexican mother and a French bullfighting father, he started playing at being a torero — using a dish towel as a cape — when he was just a tot, his father said.

He was 4 years old the first time he faced off against a month-old calf. Now 10, he has fought about 60 animals to the death, his father said. Videos on the Internet show him in the ring with injured, staggering calves — not to mention Michelito being trampled.

In Mexico, bullfighting is governed by a network of local regulations. According to rules in Mexico City, the age of bulls is established — most have to be between 3 and 6 years old — while there is no mention of age limits for bullfighters. Younger bullfighters tend to face smaller bulls and calves.

The lack of age limits and trend toward younger bullfighters has drawn young aspirants from abroad to Mexico, including one Spanish bullfighter, Jairo Miguel, who was nearly gored to death last year at age 14 when a 910-pound bull rushed him at top speed and punctured his lung.

Michelito's career apparently caused little stir until he came to southern France this summer to take part in nonprofessional demonstrations by bullfighting schools.

In France, children are not allowed to become professional bullfighters until age 16, said Andre Viard, president of the National Observatory of Bullfighting Cultures.

Beatrice Brethes, who runs a bullfighting school in France where Michelito performed, said Michelito and other children participating in the demonstrations are paired with smaller animals — calves ranging from 9 months old to a year, and weighing no more than 150 pounds.

She said no bulls have been killed in the children's demonstrations. While there are no French laws that would prevent a child from fighting an animal to the death or from facing off a grown bull, organizers said they would not let that happen.

Claire Starozinski of the Alliance Anticorrida, meanwhile, has filed legal complaints in towns where Michelito was scheduled to perform. She argued that his shows broke French labor code, which bars children under 16 from "jobs that endanger their lives, health or morality."

"This boy is a professional in his country," she said. "He killed his first animal at 6. He already has scars ... You don't teach a child to kill at age 6. The role of a parent is to protect their child. These parents are not protecting their child; they are making him take risks."

Under pressure, the town of Fontvieille canceled Friday's show out of fear for the boy. Organizers tried to move it to nearby Arles, but local security officials ruled that the arena was not up to standard.

The assistant mayor of Arles who handles bullfighting, Jean-Marie Egidio, said the city was puzzled by that ruling, which was later overturned. Michelito was performing Thursday in Arles, his last show in France before he heads home to Mexico.

As his father says: "I think he has a really great career ahead of him."